Mr. VandeWalle is the music teacher at Kocurek Elementary school in Southwest Austin.

Mr. Van started studying music more than 30 years ago when he was in elementary school.  Like you, he learned to play the recorder, read basic music notation and sing basic folk songs through his school’s music education class.  In 5th grade he joined band where he learned to play clarinet and saxophone.

In Middle School and High School he participated in Marching Band, Concert Band, Jazz Band and various other small ensembles.  He graduated from AISD's own Crockett High School (a looong time ago.)

It wasn’t until after High School that he started taking music much more seriously and decided to make it his career.  In college he began  playing live music in Austin, San Antonio and a variety of other places. He performed with several bands like Salsa del Rio and Blu Funk Junction. He also recorded several albums with these bands.   Playing with these bands has given him the opportunity to travel to places like Huatulco, Mexico, Oaxaca, Ireland, England and Amsterdam.  He currently performs (saxophone) with the Hill Country Community Band and Hill Country Jazz Band, both based in Wimberley, Texas. His work with the band has included sitting as President of the band’s Board of Directors. 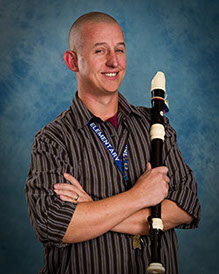 Mr. VandeWalle has been an active author in the field of music education curriculum since 2010.  He was a contributing author for Spotlight on Music: Interactive Listening Maps, a Set of 9 DVDs for Grades K – 8, published by Macmillan/ McGraw-Hill in 2010.  He  is  also  a current  author for the Music Memory curriculum published by Mighty Music Publishing.  He has also served as the Technology Chair and Webmaster for the NAfME-Texas (National Association for Music Educators - Texas Division).

Mr. VandeWalle has acted as the co-sponsor for campus programs such as the “Super Scholars”  and the Widen campus newspaper, The Widen Word.  He was selected as the “Teacher of the Year” in 2003 at Widen Elementary and in 2009 at Kocurek Elementary (2009 District Semi-Finalist).  He also spent four years serving as a PTA board member as a teacher representative, parliamentarian and historian.  Currently Mr. VandeWalle is in charge of the Koala Choir and a variety of after school programs.

He is excited about returning to Kocurek Elementary and is looking forward to the 2022-2023 school year. 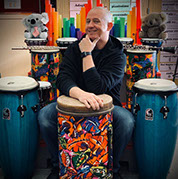